Deal volumes in health care private equity will likely decline in 2022, coming off a record 2021. After deploying nearly $100 billion in capital over the previous two years, health care private equity investors now face a reduced supply of investible assets at attractive multiples, as well as rising interest rates and general financial uncertainty. This will lead to deal flow more similar to 2018 than 2021. 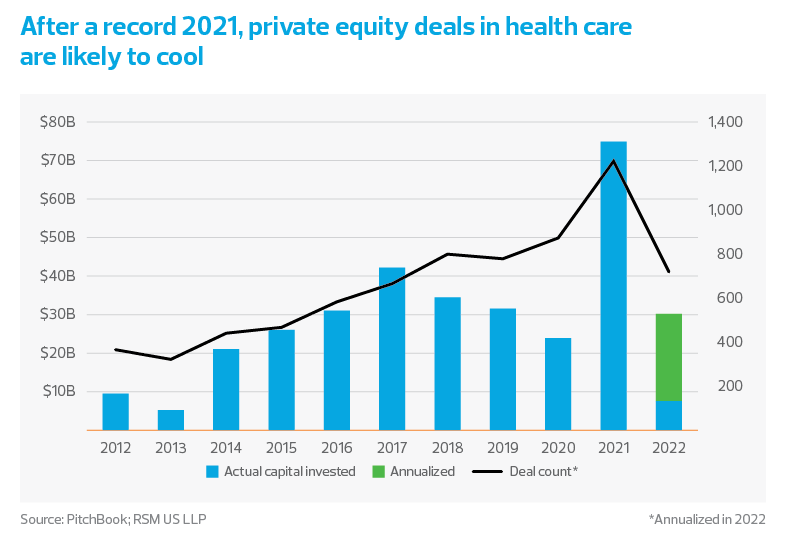 Over the past five years, health care private equity firms completed approximately 4,300 deals, according to Pitchbook data. This level of health care PE consolidation activity—plus acquisitions made by strategic partners, such as health care systems—means fewer businesses are available for purchase at attractive multiples. Put another way, if health care organizations that PE firms target were houses, there would now be fewer available to flip or purchase as investment properties. It doesn't mean the neighborhood is bad; it’s just that the houses are less suited (for the time being) for a certain class of investor.

This partly has to do with how PE works: Firms raise capital from limited partners and deploy that capital to invest in companies. Most PE firms do not generate any fees until they've deployed capital, which incentivizes them to close deals. We have seen health care PE firms raise over $250 billion over the past decade, according to Bloomberg data. This amount of capital pushed many PE firms to invest at higher and higher multiples (i.e., prices).

Eventually, the multiples become too high, and investors will pass on deals they view as too expensive, despite their desire to deploy capital. As the market overheats, deal volume will fall, and multiples will decrease.

At the same time multiples have been driven to unsustainable levels, interest rates are set to increase dramatically, as the federal government seeks to combat inflation. Almost all acquisitions, particularly those driven by PE sponsors, are financed with debt. As interest rates rise, it becomes more expensive to purchase companies, which will deter investors.

Money markets are currently pricing in approximately eight-and-a-half interest rate hikes worth 220 basis points through February 2023, according to Bloomberg data. The Fed's policy rate will increase from an implied rate of 0.844% to 2.98%. This policy rate generally influences the rates at which all other debt is issued.

So for example, if a PE firm bought a company and financed the deal with a four-year term loan of $25 million at 8%, it would pay $4.3 million of interest over the life of that loan. If the rate increased by 220 basis points to 10.25%, the total interest paid increases to $5.6 million—a 29% increase in financing costs. The way the Fed policy rate affects debt prices is more complex than this simple example, but the outcome is clear: Higher rates mean more expensive deals.

The following chart shows the timing and magnitude of rate hikes, as priced in by the money markets. 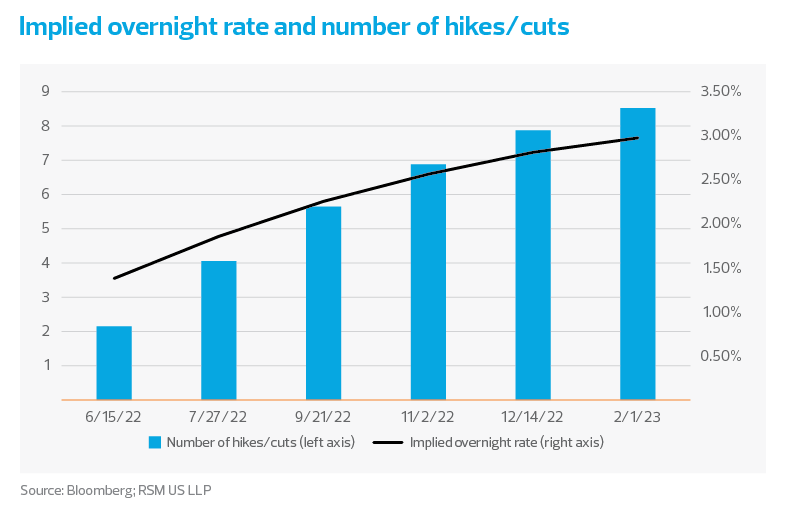 Furthermore, geopolitical uncertainty has pushed the RSM US financial conditions index to its lowest point since the pandemic. The following chart shows the index fell to -1.022 as of May 10, from 1.005 at the start of the year. The value itself doesn't mean much, but the direction of the change matters. When it falls below zero for a sustained duration, it's time to pay attention. 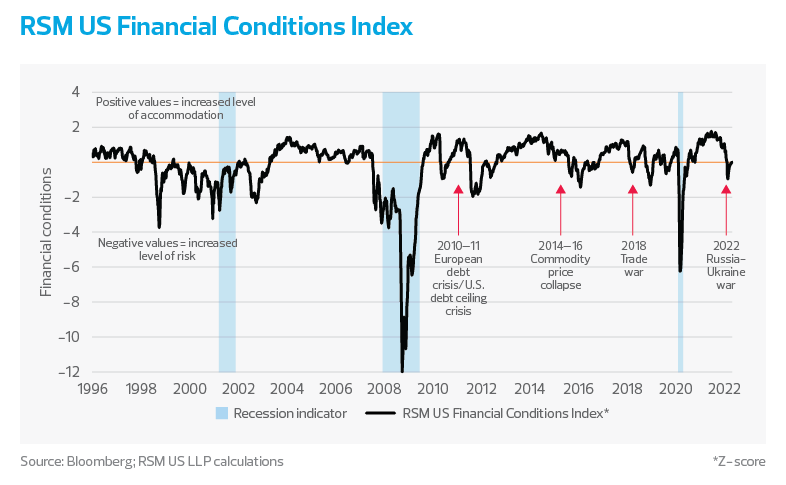 The deal environment has changed rapidly in 2022. We expect another busy year, but headwinds in the financial and capital markets are likely to result in a year that sees around 800 health care PE deals, akin to 2018, rather than the 1,200 we saw last year.

This article was written by Lori Kalic , Richard Kes , Matt Wolf and originally appeared on 2022-05-20.
2022 RSM US LLP. All rights reserved.
https://rsmus.com/insights/industries/health-care/mergers-and-acquisitions-health-care-trends.html