The return of king dollar


The return of inflation, interest rate differentials and a quickly changing geopolitical landscape are the primary catalysts behind the recent surge in the value of the American dollar.

With the Federal Reserve continuing its campaign to boost the policy rate, we think conditions are ripe for the return of a strong dollar policy and sustained movement into dollar-denominated financial assets.

In the current phase of the pandemic, the United States is the cleanest shirt in very dirty global laundry. Whatever the reasons behind the flow of funds into dollar-denominated assets, the dollar’s appreciation will dampen overall inflation through the trade channel and most likely be the de facto policy of the U.S. Treasury until price stability is restored.

The dollar is undergoing a renaissance, growing at an average rate of 3% per year since the Great Recession. That rise was capped off with a phenomenal 20% increase in value during the ongoing recovery from the pandemic.

That increase in value, though hardly a straight line, reflects the American economy’s dynamism and its ability to recover from shocks that are occurring with some regularity. We expect these trends to continue.

Like all assets and commodities traded in an open market, the value of the dollar is determined by its supply and demand. If investors were to buy more dollar-denominated assets or if businesses were to engage in more dollar-based transactions, then the dollar’s value would appreciate as local currencies are sold to buy dollars.

That same argument applies to the other free-floating currencies that are supported by market-based economies operating within liberal-democratic societies. These include the euro and British pound, the dollar-bloc currencies, and a smattering of currencies in smaller independent nations. Foreign businesses and investors are buying the stability offered by advanced-economy norms.

The resource-rich economies of the dollar bloc (Australia, New Zealand and Canada) offer examples of demand-based valuations, with the shale revolution acting as the catalyst for Canadian dollar strength in recent years.

For the pound, its strength has been the attractiveness and vibrancy of British culture, in addition to the country’s real estate, manufacturing, and intellectual capital and its role as a financial center.

For the dollar and the euro, the impetus has been the diversity of their large economies, the depth of their financial markets and a history of benchmark pricing of oil. With the history of their institutions, it is of little wonder that the euro-dollar exchange rate has been range-bound for so long.

That takes us to the discussion of currency valuation and exchange rate exposure. Every exchange rate is two-sided and will move according to changes in the valuation of either the numerator or the denominator. A political, social or financial problem in either of the economies involved in a trade will affect the exchange rate.

And because nearly all business transactions in the modern economic system include some degree of currency risk, investors need to recognize those risks and take steps to insure against exchange rate losses. 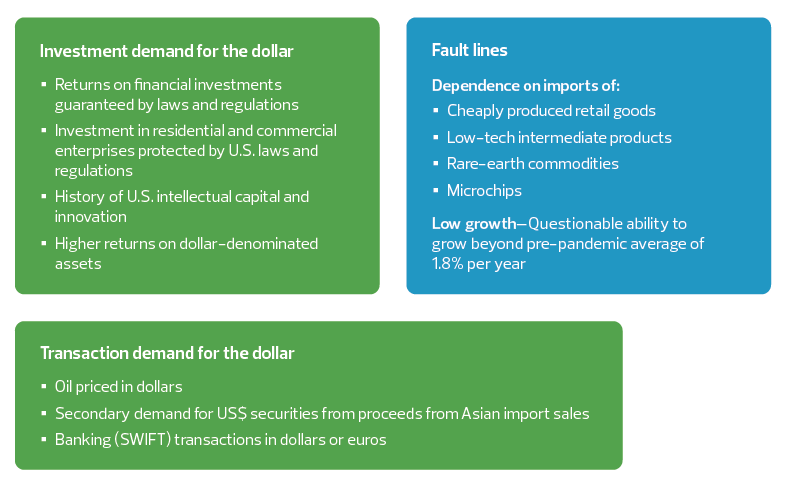 So why mess with success?

There have always been complaints about the value of the dollar, as if it were the government’s job to protect every industry from foreign competition or to rail against the supposed impact of another government’s program.

Western economies have thrived within this market-based exchange-rate system. It fully emerged with the free-floating of the dollar by the Nixon administration in 1973 and the maturation of monetary policy by the world’s central banks in the decades that followed.

With the potential exception of Switzerland and Japan, developed nations no longer use exchange rates to achieve economic policy goals. Despite the occasional calls for a weaker or stronger dollar by special-interest groups, currency valuations are left to competition among nations.

If South Korea makes the most popular phones, Britain the best murder mysteries, Italy the sexiest cars and New Zealand the best refrigerators, so be it. Let the free flow of goods and ideas be the determining factor.

Attempting to manipulate a currency’s value is most likely a fruitless enterprise. In addition, as shown during the recent trade war—in which tariffs replaced currency manipulation—producers, wholesalers, retailers and consumers will quickly adapt purchasing behavior to whatever works best, thwarting the intentions of interventionist policy.

What determines the value of the dollar?

Forecasts for the dollar

The consensus among forecasters is that the dollar will maintain its elevated value in the third quarter and then gradually fall back next year as tighter Federal Reserve policies cool an overheating economy.

Dollar strength in the near term seems particularly likely, given substantial Fed rate hikes at a time when policy rates in the euro area and Japan remain close to zero. That should increase the return and demand for higher-yielding, dollar-denominated securities.

Next year, Europe might be dealing with an energy crisis if Russia cuts off natural gas supplies. At the same time, politics will most likely play a part in maintaining Japan’s extraordinarily accommodative monetary policy, pressuring the yen lower just as the Fed maintains upward pressure on interest rates and the dollar.

In a longer-term view, there’s no reason to doubt that the secular convergence among the developed economies in terms of interest rates and economic growth will continue, particularly given the recent political changes and the reemergence of common causes.

But that’s not to say there won’t be episodes where a shock is felt by one economy more than another. The world goes from one crisis to another, a situation unlikely to change, and we should expect exchange rates to reflect the ability of each region to absorb those shocks.

This current episode of dollar strength began in May 2021, as it became clear that the vaccination program would succeed and the U.S. economy would most likely lead the rest of the world out of the health crisis.

The dollar’s value was supported in anticipation of higher U.S. interest rates and the self-fulfilling higher returns on investment in dollar-denominated financial assets.

And with domestic demand growing in recent months, imports have far outstripped exports. Proceeds from increased sales of imported goods were, as usual, being parked in the convenience of short-term, dollar-based securities, all of which added to dollar strength.

The dollar declined from $1.22 versus the euro in May 2021 to $1.01 in the first weeks of July—appreciation of roughly 17%, and a significant move toward parity with the euro—while gaining 26% on the Japanese yen. 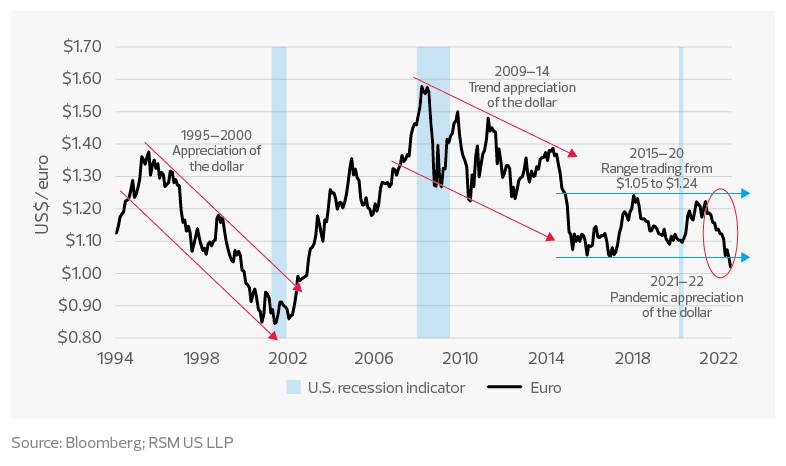 International trade and the dollar

What can we say about the current demand for the dollar, and what will determine the extent of that demand over the coming quarters? Let’s begin with the inconsistent impact of foreign demand for U.S. goods and services on the dollar.

Protectionist practices such as manipulating currency values were long ago thought to maximize output and profit. But the relationship between currency value and external balance is far more nuanced, as the 2018-19 trade war and the manufacturing recession it kicked off should remind us.

Consider the history of foreign demand for U.S. goods and services and its effect on the current account balance. During the 1995-2001 technology boom, the United States was thought to be at the vanguard of a brave new world, and the value of the dollar shot up.

But at the same time, actual production was being sent offshore. The United States was no longer the factory floor for the world, and the current account continued to worsen. After the technology stock bubble burst in 2001, the dollar weakened in lockstep. 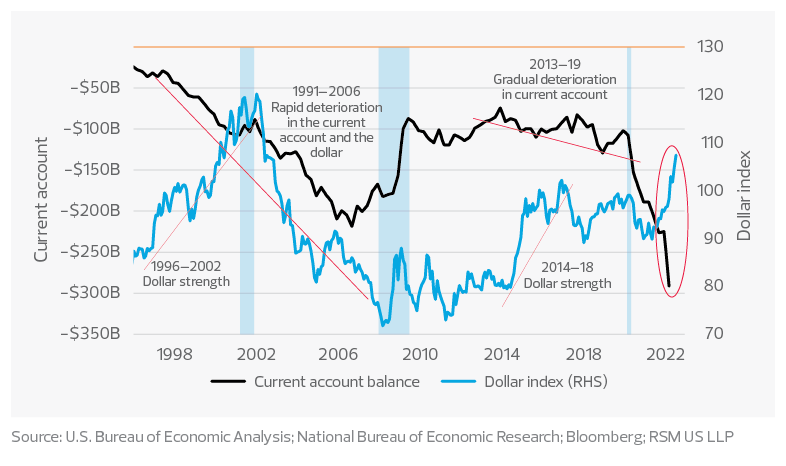 Financial transactions and the demand for dollars

Banking transactions since 1973 have been executed through SWIFT—the Society for Worldwide Interbank Financial Telecommunications system based in Belgium with data centers in the United States, the Netherlands, and Switzerland, and a command center in Hong Kong.

Recently, nearly 80% of the transactions were dollar- or euro-based, which might help explain the narrow range of trading between the dollar and the euro. The British pound was used in 8% of SWIFT transactions in 2011, with the recent drop to 6% perhaps an unintended consequence of Britain closing itself off from Europe. 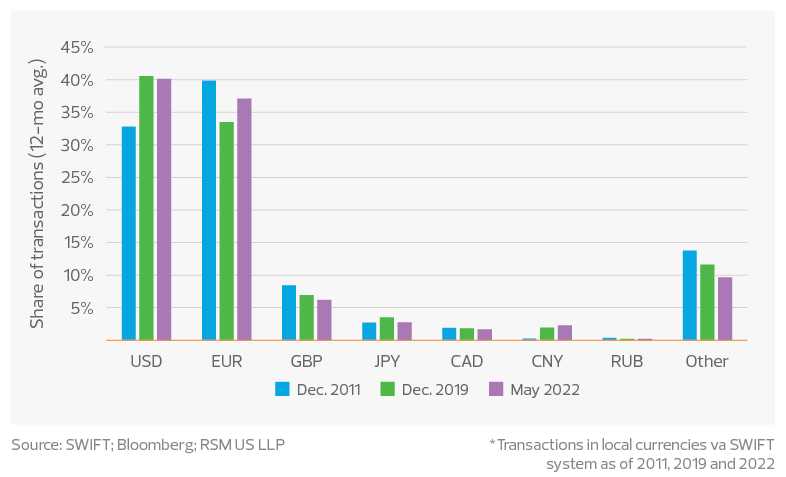 Oil transactions and the demand for dollars

Last year, we estimate, roughly $6.5 billion changed hands each day in the buying and selling of crude oil. In the first half of this year, that jumped to approximately $10 billion as the price of oil topped $100 per barrel.

Regardless of the price, there will be a consistent global demand for oil in the coming years, with China the largest importer. That implies a consistent selling of renminbi to buy dollar-denominated barrels of oil, with implied support for the dollar’s value whether or not the plan to cap the price of Russian supplies is successful. 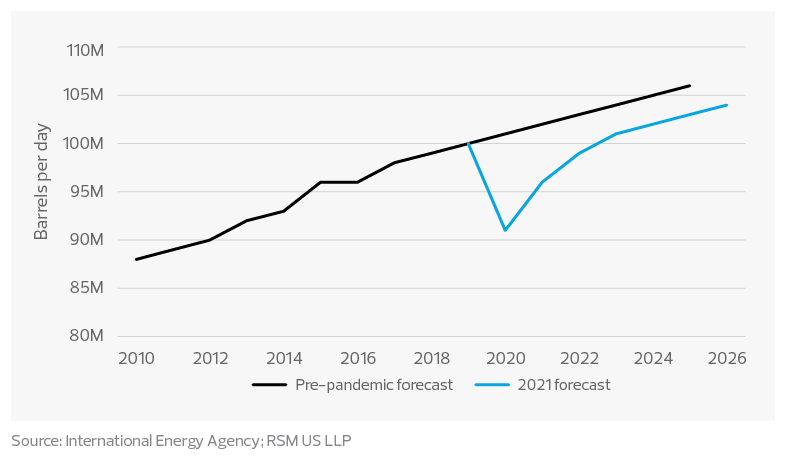 Interest rates in each country are determined by monetary-policy settings for short-term securities, with longer-term bond yields including the risk of holding those securities over the course of years. Implicit in those settings is the ability of each economy to support growth and the return on investment.

Because of the depth of the bond markets, you would expect an efficient setting of interest rates. As such, 10-year interest rates in the developed economies declined until 2012 in response to the universal elimination of the risk of inflation and the concurrent moderation of growth.

As the recovery from the global financial crisis took hold, 10-year interest rates remained higher in the United States than in Europe and Japan, which corresponded with the increase in net portfolio investment by foreigners in U.S. long-term securities. Those portfolio flows implied confidence in U.S. institutions and the nation’s economy, with higher nominal and real (inflation-adjusted) returns on U.S. investment resulting on balance in a stronger dollar. 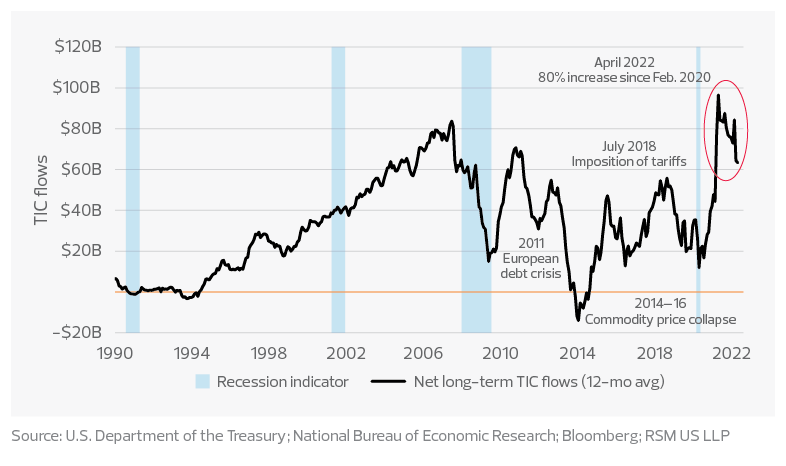 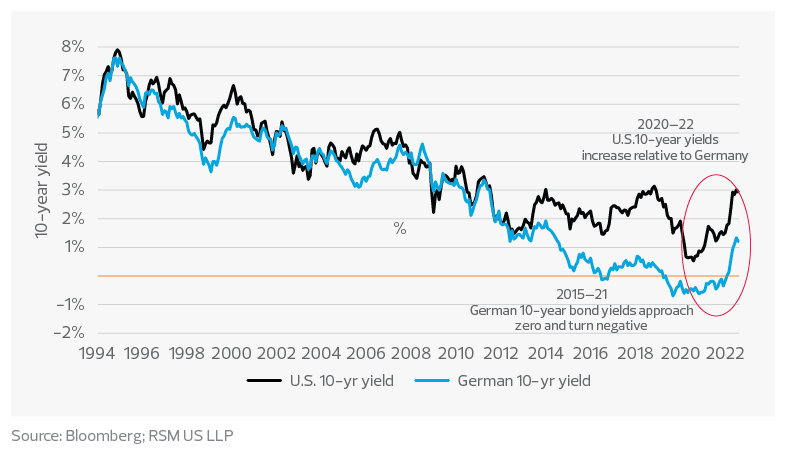 The effect of a stronger dollar

In terms of inflation, a stronger dollar makes final and intermediate foreign products more affordable, which should apply downward pressure on the inflation rate.

A weaker dollar should help exporters retain their global market share. But that assumes that price is the only criteria for foreign consumers and producers, who might instead base their preferences on the reliability and quality of other suppliers.

There has traditionally been a time and place for a strong dollar. At the end of global economic downturns, U.S. spending has helped kick-start global recoveries, with U.S. purchases of cars and American occupancy of hotel rooms and restaurants helping spur foreign growth.

In the current recovery, taking place amid geopolitical tensions and disrupted markets, we would bet on the relative energy independence of the United States and the resilience of the U.S. economy.

As we saw during the global financial crisis, the consequences of the war and energy shortages in Europe will undoubtedly spill over into the North American financial markets and the economy. This should be a reminder for policymakers to address short-term needs within the framework of longer-term investment in that resilience.

This article was written by Joe Brusuelas and originally appeared on 2022-08-02.
2022 RSM US LLP. All rights reserved.
https://rsmus.com/insights/economics/the-return-of-king-dollar.html