What to expect at the end of business cycles


The Federal Reserve has a blunt yet effective instrument to fight inflation: raising the federal funds rate. But using it requires a delicate balancing act.

We expect the current pattern of the gradual deceleration of economic growth to continue into the next year and for the Fed to operate largely on its own, without the benefit of any fiscal measures from Congress.

To be clear, the economy is not in recession. Real growth in gross domestic product over the past four quarters has been higher than in the preceding quarters.

These days, we have an economy buoyed by roughly $2.2 trillion in excess savings accumulated during the pandemic, a robust labor market, and strong, fixed business investment that continues to bolster a growing economy. But we cannot ignore rising retail and wholesale inventories and the soaring costs that are impeding the ability of firms and households to sustain that growth.

For this reason, we have revised our forecast for growth this year down to 1.5%, with the risk of a slower pace.

The figures that follow should help explain our viewpoint: Even as the economy stays out of recession, it is operating on a knife’s edge and is vulnerable if conditions deteriorate.

Real GDP growth at the end of economic booms/recoveries 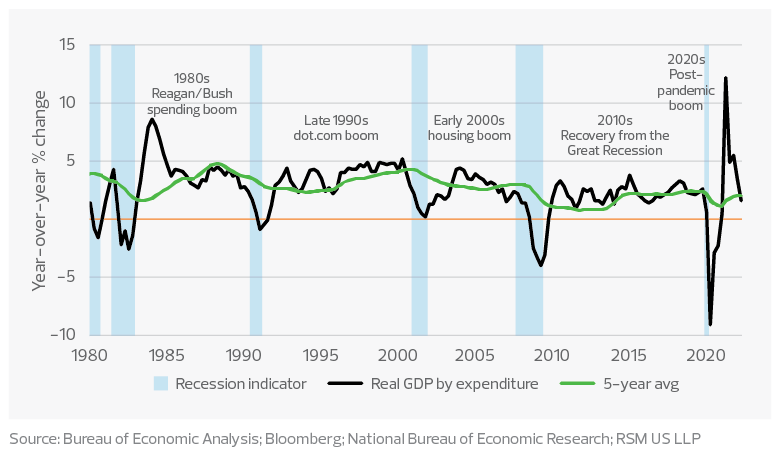 The Fed has a dual mandate: to promote full employment and price stability. Now, the multiple shocks of the health crisis, supply chain issues and geopolitical strife have created the conditions for persistent inflation, which the Fed is addressing by raising interest rates and reducing its balance sheet. 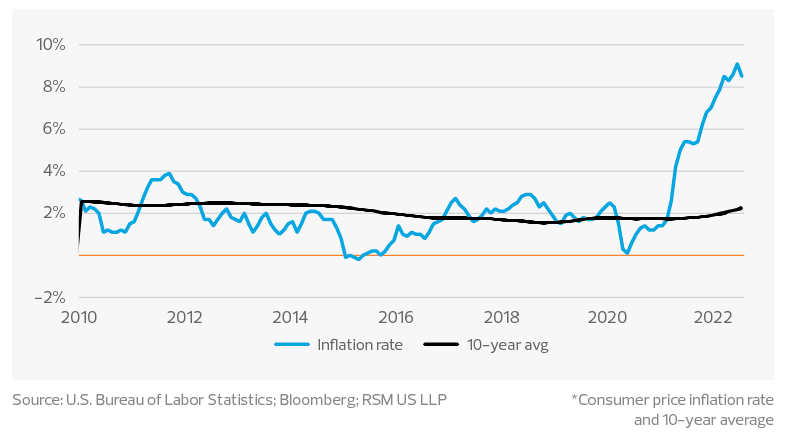 U.S. financial conditions have been tightening since it became clear that the Fed would begin hiking interest rates. In recent trading, financial conditions improved along with the equity markets but continue to imply an increased level of risk. That increased risk results in a higher cost of investment and a lower propensity to borrow or to lend. 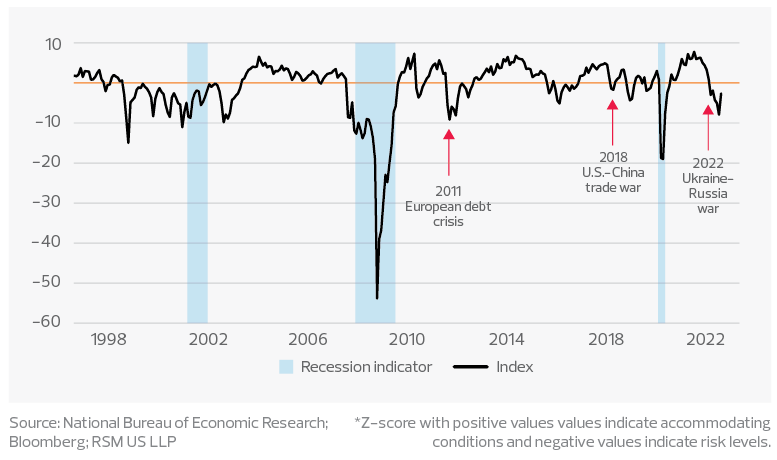 Beginning in the third quarter of 2020, there have been eight consecutive quarters of positive growth in investment in intellectual property.

While you would expect business investments to decelerate as the business cycle winds down, the peculiar circumstances of the post-pandemic labor market—along with the availability of near-zero interest rates—has spurred ongoing investments in productivity, suggesting the potential for the production sector to maintain increased output. 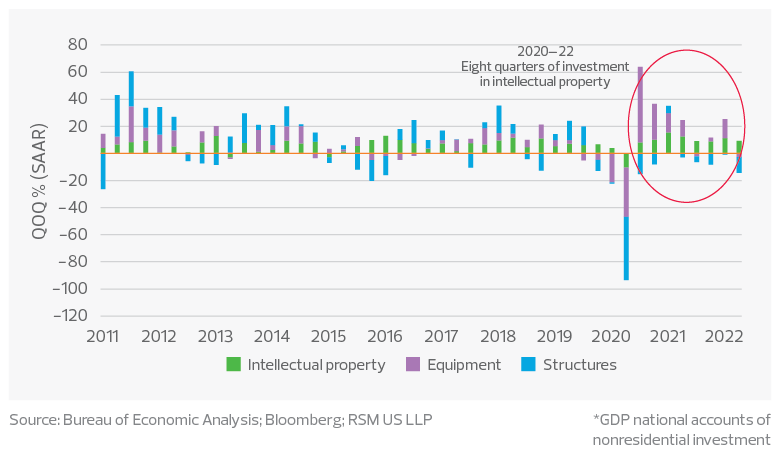 The supply chain has been making progress over the past nine months after bottoming out last October, according to the RSM US Supply Chain Index. Along with the impact of recent tightening in monetary policy, improvements in the supply chain have created the conditions for increased inventories.

Manufacturing and trade inventories in nominal dollar terms grew at a 16% yearly rate in the first six months of the year, compared to a 3.6% nonrecessionary average from 1992 to 2019.

In real (inflation-adjusted) terms, inventories are growing at a nearly 5% yearly rate after declining throughout the two-year period of supply chain issues. 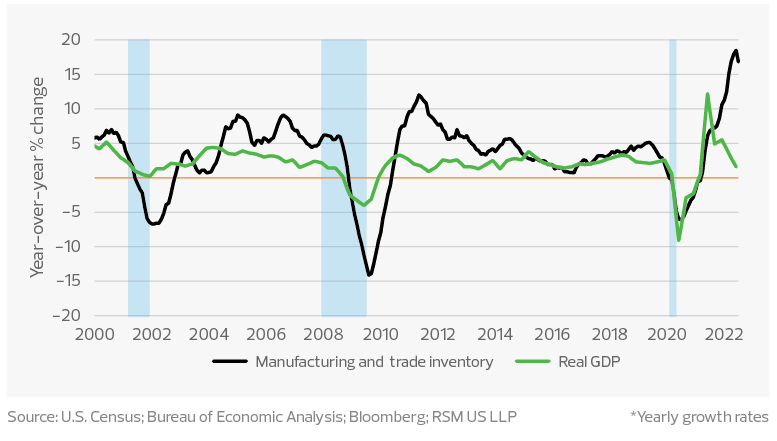 What could derail the economic recovery?

Typically, economic growth begins to wane as the business cycle matures. But it usually takes an event to push it over the edge into recession.

What are the tripwires for the next recession? The most obvious candidate is the collapse of cryptocurrencies if it reduces confidence in the stability of the financial markets or causes a fire sale of other assets. But the more likely catalysts for a recession are the continuance of Russia’s war on Ukraine and a debt crisis or health crisis in China.

Even without a crisis, a slowing economy has the potential to cause further distortions and long-term damage.

For instance, much has been made of the labor market reaching a milestone—a general return to pre-pandemic levels of employment.

Reaching that milestone is encouraging, but only puts us back to square one. There is still work to be done to recover the lost output over the past two and a half years, and for the labor market to accommodate population growth. 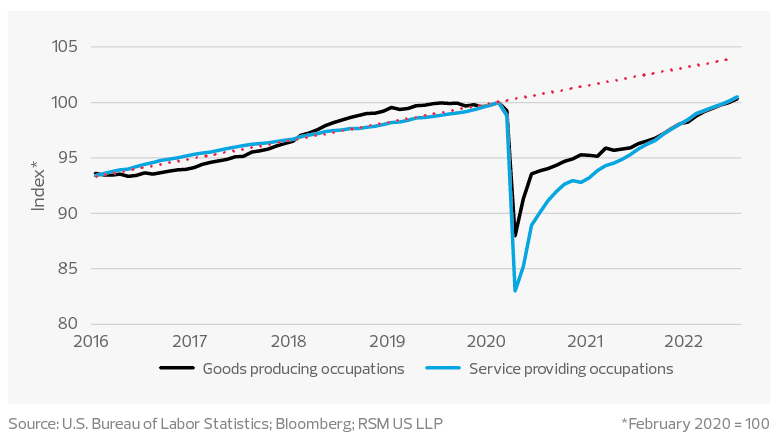 This article was written by Joe Brusuelas and originally appeared on 2022-09-07.
2022 RSM US LLP. All rights reserved.
https://rsmus.com/insights/economics/what-to-expect-at-the-end-of-business-cycles.html