Why excess labor demand is unhealthy


The labor market's recovery from the pandemic has been nothing short of remarkable. Most of the staggering number of job losses have been recovered, and the unemployment rate is near its pre-pandemic low.

The economy is fewer than 1 million jobs from reaching its pre-pandemic level. Yet there were a record 11.55 million job vacancies—a proxy for labor demand—reported in March, according to government data.

That's because as strong as the economy has been, companies today are facing a harsh reality: The rapid growth of the past year won't come back anytime soon.

Yet many companies are planning to hire workers as if such growth is sustainable.

Although there are signs that companies are adjusting, especially as equity markets retreat, many companies have yet to get the message. And the scramble by companies to find workers—or simply to keep the ones they have—leads to higher wages, which in turn, leads to higher inflation.

The result is the stunning number of job vacancies as workers continue to quit their jobs at historically high rates.

The squeeze is made worse as workers who have been on the sideline since the start of the pandemic have been slow to come back to the labor force.

In a sense, it's a virtuous circle gone wrong as labor demand spirals out of control. Then, it is no surprise that Federal Reserve Chairman Jerome Powell said that the labor market is at a "tight to an unhealthy level"—hardly the characterization a Fed chairman usually utters in a strong economy. It is clear forward guidance for the market to start reacting as the Fed moves to put an end to an era of near-zero interest rates.

We believe this imbalance should prompt companies to reassess their growth potential, and as a result, their demand for labor.

Such a reassessment, in fact, might work in the Fed's favor as a major decline in labor demand might take place before interest rates are brought back to neutral, potentially in the second half of the year or early next year. The decline will most likely be a sharp one, but it is inevitable and necessary.

An unrealistic level of labor demand

Behind the surging labor market is an overheating economy. Last year, elevated spending and economic growth rates contributed to a significant increase in corporate profits, rising by 20.97% in the fourth quarter on an annualized basis. That bullish sentiment spilled over to outsized gains in the equity markets.

So, companies reason, why not keep a good thing going? The expectation for further growth, especially when order backlogs remained historically high because of global supply chain issues, pushed labor demand to outpace personal spending and even overall gross domestic product last year and continued in the first quarter. 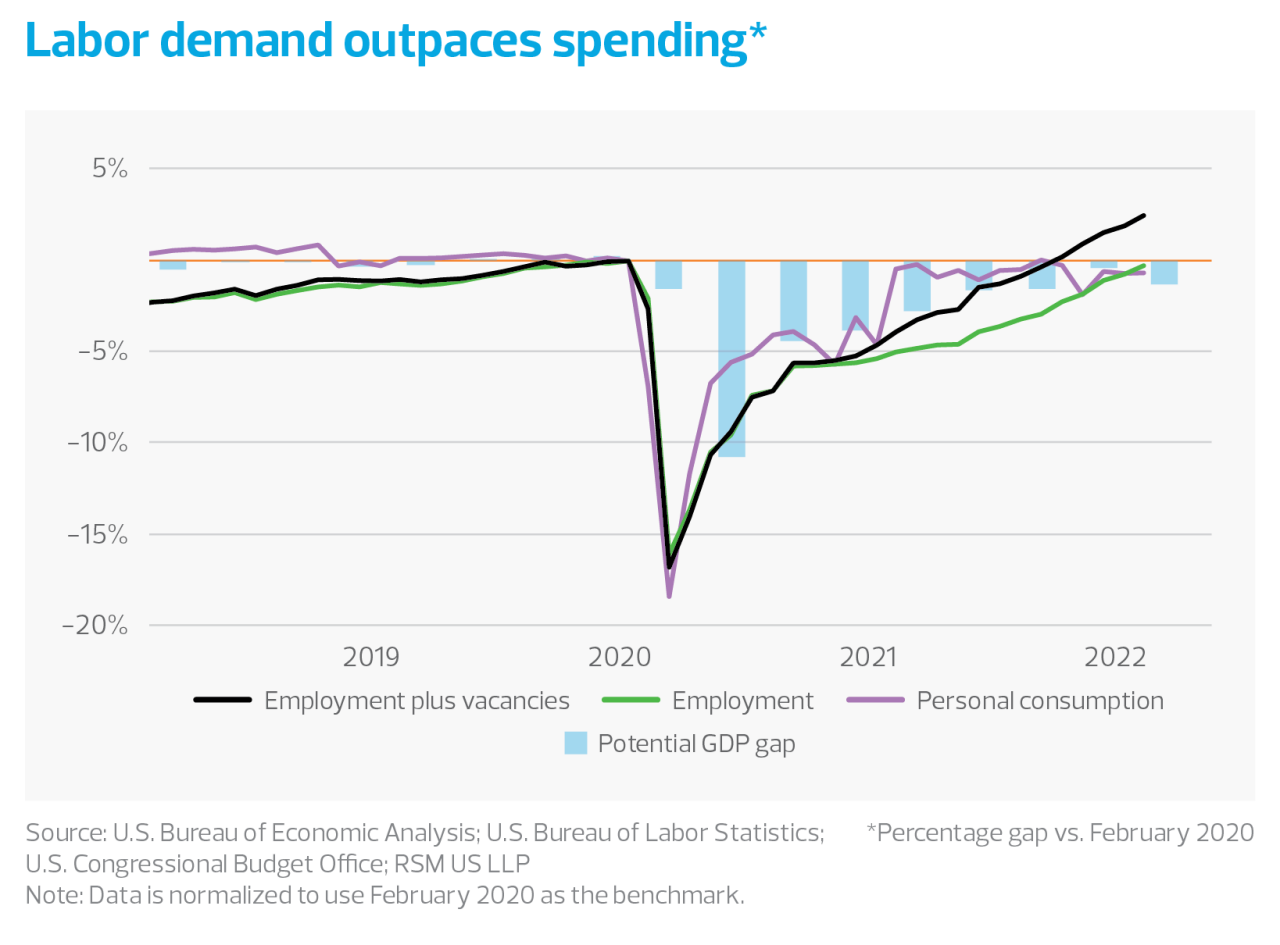 We normalize the levels of employment and employment plus vacancies by using the pre-pandemic level in February 2020 as a benchmark. For GDP and personal spending, while using the same benchmark, we further normalize the two series such that the pre-pandemic upward trend for personal spending and potential GDP, calculated by the Congressional Budget Office, are also controlled.

What has become clear is that even as the level of employment has nearly reached what many consider full employment, with the unemployment rate at 3.5%, total labor demand—employment plus vacancies—continues to surge. In March, it was 2% higher than in February 2020, or 4.1 million in extra demand.

Yet the underlying economic foundation—shown by the level of personal consumption and GDP, which are both near the pre-pandemic trend—shows no support for such a high level of labor demand.

As spending approaches its potential level at full employment, growth is expected to slow down to the long-term rate of 1.8%.

But because companies misjudge growth potential, they continue to make more hiring plans to meet what they see as a much larger demand down the road than it turns out to be. 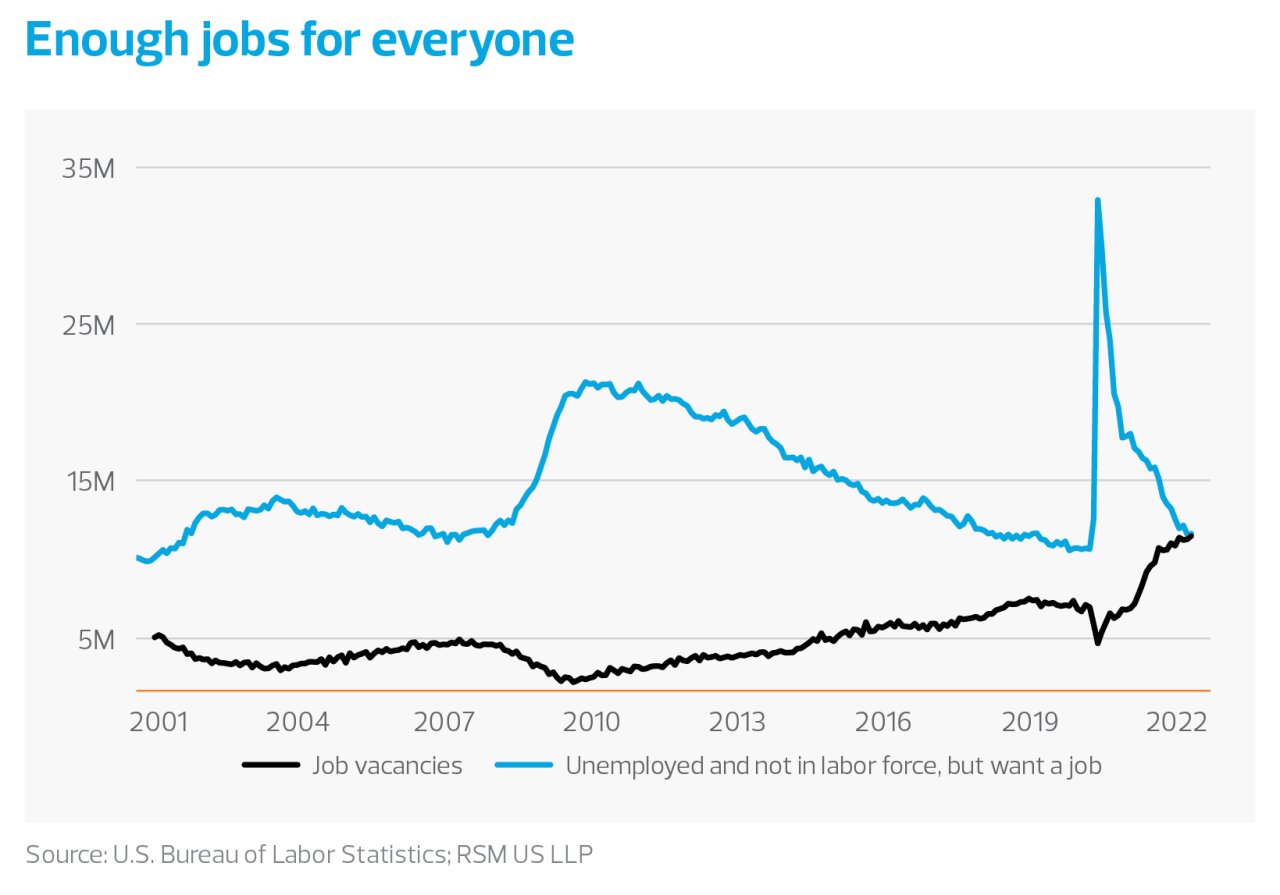 There were 11.55 million job vacancies in March, while the number of unemployed workers was 5.95 million. The number of not-in-the-labor-force workers who want a job was 5.7 million. The combined number for labor supply was 11.65 million.

That means theoretically, even if everyone who left the labor force because of COVID-19 came back, there would still be enough jobs for everyone but only 100,000 of the total number of workers who want a job.

That scenario would never happen; not all vacancies can be filled with unemployed workers because of mismatches in skills or preferences. But it still shows just how improbable labor demand has been because there are simply not enough workers.

Early evidence from companies like Amazon, Netflix, Meta (previously known as Facebook), Peloton and Snapchat—which have seen their stock prices drop because of significant declines in demand—points to the disconnect between where the economy is heading and what businesses had expected. Meta, for example, recently announced it would curtail hiring because of stagnant growth. Uber also said it would reduce hiring because of what it called a "seismic shift" in market conditions.

That said, the flaws in growth expectations are quite difficult to avoid during the current volatile and uncertain period that even the Federal Reserve has been struggling to deal with. Moreover, unforeseen economic shocks like the recent COVID-19 wave and the Russia-Ukraine war also contribute to the complexity of predicting demand and growth.

Most labor shortage issues can be traced to workers who left the labor force because of the pandemic and were slow to return. But with employment getting closer to the pre-pandemic level, outsized labor demand is becoming the main cause of labor shortages.

The Fed's move to increase its policy rate by 50 basis points in May, the largest one-time increase since 2000, will certainly help drive down growth expectations and dampen labor demand.

We believe it is now crucial to turn the focus toward private companies' shift in labor demand to better assess how the tight labor market will unwind.

This article was written by Tuan Nguyen and originally appeared on 2022-06-07.
2022 RSM US LLP. All rights reserved.
https://rsmus.com/insights/economics/why-excess-labor-demand-is-unhealthy.html